As I recently made the move from Arizona to Colorado, I’ve been looking for any excuse to escape to the mountains. My mother came to visit last week and I took her on some adventures. But the grandest adventure of all was our exploration to Rocky Mountain National Park. I’ve seen pictures, I’ve heard stories, but I knew deep down that didn’t do justice. Somewhere that is so gorgeous, so beautiful, so mesmerizing, has to be seen in real life.

So we made the trip out there. Rocky Mountain National Park sits right outside the town of Estes Park, Colorado. This cute little town is famous for its natural beauty and also because it holds the location to one of the biggest horror films of all-time, The Shining. The Stanley Hotel stares at you as you drive through the town and gives you an eerie vibe.

Driving through this area was a little appetizer. A precursor to the immaculate beauty that lies ahead. A taste of nature that will be on display on its grandest scale. Huge mountain tops, snow covered jagged rocks, peaks, valleys, you name it, it was here. And we haven’t entered the park yet.

After we waited in the line of cars for a bit, we made it in. Right off the bat you see another reason why this park is so remarkable; the wildlife. We see elk and deer off to our right, with people pulled off the road to take a closer look. Although these are all gorgeous creatures, my mother and I weren’t as intrigued. I believe it’s because we lived in northern Arizona for awhile, so we’ve seen our fair share of elk and deer. As the tourist stand there taking pictures and marveling at their existence, we preceded onward. As we made the drive down our stop-and-go route, there were many places to pull off and soak in the beauty.

And the one thing that made this excursion even better, it’s Fall. And you know what that means.. Fall colors. Something about this season makes me happy. Maybe its the cool, crisp air, maybe it’s the changing leaves, or maybe it’s the sign that the beauty and fun of winter is right around the corner. Whatever it is, it makes me happy. And Fall was very evident on this adventure. Everywhere you turned you saw Fall colors. Orange, yellow, red, brown, the  leaves were showing us why Fall is arguable the prettiest season. We stopped at a few spots to soak in the colors and add to our phones’ camera roll. It was a great experience. 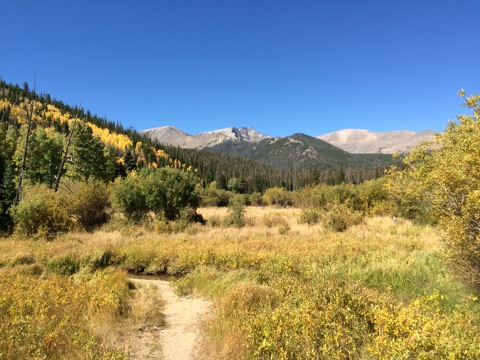 As we continued our drive, we also continued to climb in elevation. The parks begins at roughly 7,500 feet and ascends to an amazing 11,000 feet! As we made the drive, we hit some traffic. We were in some pretty slow traffic for about 30 minutes until we started moving steadily again. It made me a little frustrated and I couldn’t figure out what caused the delay. Then, as cars started to move, I saw the culprits; massive elk. Right off the road there was a meadow stocked full of elk. Some were gigantic with towering antlers. Now I see why they call those “elk jams.”

The journey eventually pressed onward  to where I was able to capture this panoramic shot:

Now I’ve seen large mountains before, but nothing compared to the giants that I observed on this day. These guys were unbelievably large and there were plenty of peaks to go around.

From there on the road became substantially more steep. We hit 9,000, then 10,000, and the elevation gain started to take it’s toll on the human body. I became slightly dizzy, but nothing overwhelming. However, my mom began feeling ill. She felt nauseous, dizzy, and had no energy. Personally, I wanted to get out of the car and explore, but my mom wanted to get to lower ground. So me, being the nice son I am, pressed onward and drove my mom down the mountain to the other side of the park. I managed to capture this shot before we made our descent:

Although this was the most extreme part of the day, I feel it was also the most beautiful. I don’t think I’ve ever seen peaks more mesmerizing, more powerful, or more astonishing than these peaks pictured above. I was honestly at a loss for words when I gazed deeply at these giants.

The pictures don’t do justice.

As we made our trek down the slope to the other side of the park, the beauty continued. Large valleys, gorgeous lakes, and even a stray fox made an appearance on our exit.

My first day seeing Rocky Mountain National Park will hold a special place in my heart.

It was everything I dreamed of and more.

The true beauty, pure nature, and colossal giants in this park prove why it’s considered one of the most astonishing places on earth.

Mother nature compares to nothing.